Last year there were 939 tornados in the United States according to the National Oceanic and Atmospheric Administration's (NOAA) Storm Prediction Center. This was actually down from previous year which yielded 1691 tornadoes, one the biggest years for tornadoes and tornado deaths.

Predictions for the 2013 year are starting to trickle in as meteorologists and severe weather enthusiasts compile key ingredients for tornadoes. Many factors, including drought conditions in the midwest, the moisture in the Gulf, the Jet Stream and chance circumstance or an act of God determine the way the year will turn out. The website of Tornado Titans shot off a prediction that we would have an average amount this year.

As Midwesterners living in tornado alley, an area of the United States notorious for the high number of these devastating storms, we keep close watch on the weather and cross our fingers. The goal is that if a funnel touches down on the ground, people will have been alerted prior and have enough time to get to safety.

High winds associated with tornadoes do as much damage to buildings and other structures as the actual funnel itself. Spray polyurethane roofing with closed-cell foam is capable of sustaining high winds and "offers increased resistance to hail, flying debris or wind-blown objects during high wind events," according to a 2008 report from Honeywell. The report goes on to say that "SPF roof systems have a proven track record for protecting buildings against severe storms, tornadoes, and hurricanes."

Closed-cell spray foam roofing enhances the structural integrity of a building due to it's dense properties and rigid nature after it is cured. It also doubles the wind uplift resistance of your roof. In June 2006, the National Institute of Standards and Technology (NIST) released Performance of Physical Structures in Hurricane Katrina and Hurricane Rita, stating "a number of spray polyurethane foam roofing systems were observed . . . Some of these were estimated to be about 20 years old. With one minor exception, all were found to have sustained Hurricane Katrina extremely well without blow-off of the SPF or damage to flashings."

There is not much our human population can do to hold back mother nature when she is ready to hit. However, sometimes we come up with some pretty good concepts that we can actually put into reality. Closed-cell polyurethane spray foam roofing is one of them. 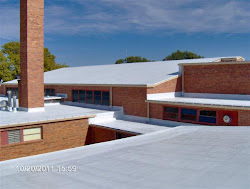